The Artists on Fanø

Situated in Sønderho, the Fanø Art Museum is a beautiful and small Art Museum, that since 1992 has been located in Kromanns, a protected building.

The museum owns a string of works of art, both by older and younger artists. Thanks to the museum's patrons for many years, Alice and Tage Sørensen, the museum was expanded in 2013 with a new extension which has made it possible to create a good variety in the exhibitions, so that the museum can show both current art and art from the museum's own collection . Each year there are 3 to 4 changing exhibitions of both younger artists and artists from the collection.

The art collection was founded by Ruth Heinemann, married to the painter Reinhard Heinemann. She was supported by none other than Prime Minister Viggo Kampmann, Minister of Culture Julius Bomholt and Esbjerg's then mayor Henning Rasmussen.

The museum has a collection of more than 1200 works by well-known and lesser-known artists, but artists who all in one way or another is or have been associated with Fanø. All the way back to the late 1800s until today, there have been different groups coming to the island and who found inspiration in the Wadden Sea, Fanø's nature and culture, and mutually helped and influenced each other.

The works in the collection represent different periods in art history: from the museum's oldest paintings from the mid-1800s, painted by the maritime painters Viggo Faurholdt and C.F. Sørensen, a smaller collection of the national romantic Johan Julius Exner's portraits and idyllic genre images, to current artists such as Jane Klerk, Trine Søndergaard, Lise Blomberg, Finn Hjortskov Jensen and Marie Louise Exner; the latter two both live on the island.

Realism and naturalism are evident in many of the museum's works. The museum owns some sketches of Holger Drachmann from his visit to the island in 1993, where Drachmann predominantly depicts the lives of tourists, while other realistic painters such as Niels Pedersen Mols and Marius Hansen depict the everyday life of the population. But Fanø is an island where the global and international have always been relevant, and there has been some exchange with Germany for a number of periods. Both the impressionist August Wilckens and Noldes teacher Jacob Nøbbe, who both owned houses on the island, have been inspired by Fanø's nature and people, especially the women, who made sure that everyday life worked while the men were gone. Also for Reinhard Heinemann, the island where he lived from 1937 until his death in 1967 was a sanctuary.

Other well-known artists from the collection are the painter Johan Rohde, the initiator of The Free Exhibition 1891, known both for his paintings, his silver works and furniture. In 1934 he received the Thorvaldsen Medal for the painting Mother and daughter on their way to church. Dohm, also known for his portraits and depictions of the liberated woman, should be mentioned in connection with the artists on Fanø, where he found inspiration in the beach, the sea and the dunes.

The museum also has a small collection of the Swedish Art Nouveau painter Forsberg, which, with the cultivation of the aesthetic in his watercolors, has inspired the younger artist Eva Louise Buus.

The museum also houses works by talented but still unknown female artists such as Hedvig Frydensberg, Else Nøbbe, Anna Maria Mehrns and Annemarie Hansen; the latter clearly inspired by the color choices and design language of the modernists.

A young artist who has recently moved to the island is Christina Malbek, whose works have been named for a renewal of Danish landscape painting. Christina Malbek mostly works with large canvases with lots of details and with photos as publishers. 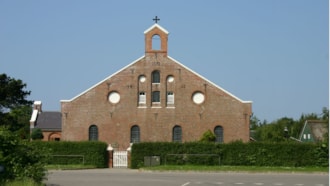 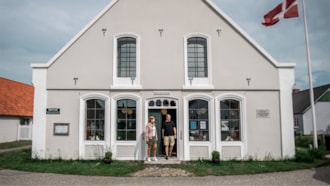